Information about the most important monuments in Malaga

When traveling to Malaga you cannot miss a visit to some of the most interesting sights of the city. From Malagatransfer we would like to facilitate the choice of the places we consider the best sights of Malaga. Furthermore, due to its proximity you could complete your day by visiting one of the museums of Malaga city.

The Fortress Alcazaba in Malaga

The Alcazaba is along with the Cathedral the most important monument of the city. In the X century the Muslims built the fortress located at the foot of Mount Gibralfaro on top of a Phoenician-Punic fortress. Possibly the management of the construction of the Alcazaba was decided by the Berber king or Badis ben Habus who allegedly took a considerable amount of rocks of the Roman Theatre for making statues and columns of the Alcazaba in Malaga. 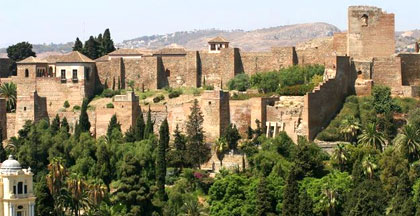 Originally the monument occupied more than double the space of what is now left standing; moreover, in the past the Fortress housed up to 100 towers, three palaces and a wall that rose to 3 meters high. Despite the deterioration it remains a great monument that definitely is worth a visit during your holiday in Malaga.

The history of the Roman Theatre in Malaga is curious since its discovery is relatively recent, having been found in 1960 and by accident. It was not until 1995, when was decided to demolish the house of culture and restore the area, when the complete theatre could be seen.

The Roman construction was attributed to Emperor Caesar Augustus in the first century BC when the city was Roman with the name Malacca. In 2010 was annexed the striking Interpretation Centre, designed in glass and wood where you can obtain more information about the Roman world and this theatre.

The Cathedral of Malaga

Located in the city centre, the Cathedral is without doubt the most impressive religious building in Malaga and one of the most beautiful Renaissance buildings in Andalusia. The construction of the Cathedral lasted more than 250 years between 1528 and 1782, on top of a congregational mosque on a decision taken by the Catholic Monarchs when they conquered the city of Malaga in 1487.

Initially, the Cathedral was designed with two towers along the main façade but eventually they just completed one of 93 metres height; for this fact it is known as La Manquita (the one-armed). Inside, the central area has two heights and from the entrance you cross one of the three lanes divided by huge columns with numerous chapels on each side. Once you reach the chorus and cross the Transept and the Presbytery you reach the impressive altar. Every detail of the Cathedral is praiseworthy; the great height of the roof is also impressive.

The bullring of La Malagueta 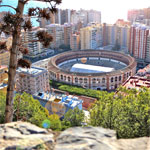 In Paseo de Reding, not far from Gibralfaro and within walking distance of the harbour, is located the bullring of Malaga built during the third quarter of the nineteenth century in Neomudejar style. Being top notch, this square is 52 meters in diameter with complete facilities of the Bullfighting world and a Museum open to the public. Actually the bullring of Malaga is a bullfighting season enclosure covering large arenas during special events and during major festivals such as Easter or the August Fair, among other relevant dates of Malaga.

Gibralfaro Castle stands on the mountain of the same name, which was chosen in honour of the lighthouse that existed within the enclosure in the past. It was Abderraman III who propelled the conversion of the ancient ruins into a fortress. The main objective of Gibralfaro castle was to keep troops to protect the Alcazaba from possible sieges. Later on, with the arrival of Yusuf I, Gibralfaro became an Alcazar. Today the Castle is one of the most important attractions of the city and we highlight the wonderful views when climbing up the tower Torre del Homenaje. Next to it there is a nice viewpoint from where you can take amazing snapshots of Malaga.

Public transport in Malaga works really well, especially to reach the city centre, as there are numerous bus lines that stop at the Alameda Principal near the centre of Malaga. The train station however is situated a little further from the centre and therefore may be a less advantageous option.

Thanks to our tour service you can visit some of the most important monuments of Malaga city; visit our Excursions page and get in touch if you're interested in booking a day trip to Malaga.