For travellers, and especially for those who come from other provinces with the AVE high-speed train, are interesting our private transfer services from the train station Maria Zambrano to any destination on the Costa del Sol as for instance Marbella, Estepona, Benalmadena, Torremolinos, Fuengirola, etc. We also do trips to inland villages, to municipalities in the Axarquia region in Malaga such as Nerja or Torre del Mar and the main Andalusian cities like Seville, Granada, Cadiz etc.

From the train station Maria Zambrano located next to the bus station and just over 2 kilometres from the port, travellers have access to the suburban Renfe network and the AVE High Speed ​​Train connecting the province of Malaga with the most important cities in Spain such as Madrid, Seville, Barcelona, Cordoba and Valencia, among others.

The train station is located inside the Vialia shopping centre with boutiques, gift shops, accessories shops, an electronics and appliances store called MediaMarkt, movie theatres and a variety of restaurants of the most popular franchises.

More information about the suburban trains along the Costa del Sol

Local trains connect a large number of towns on the Costa del Sol from the centre of Malaga to Fuengirola. There are two lines on which you can travel between the towns listed below:

If you wish to travel beyond these municipalities or if you are carrying too much luggage, we can help you get to where you need to go in the most comfortable way possible.

Taking the train from Malaga airport

Getting to the suburban train station at Malaga airport is an extremely simple task. After leaving the Terminal 3 and being situated next to the taxi stand and bus stop, you only have to cross the road to find the Renfe commuter station at the airport. This station allows you to connect to the network that covers suburban train travel to different destinations on the Costa del Sol such as Fuengirola, Benalmadena, Torrequebrada, Torremolinos and of course Malaga city. 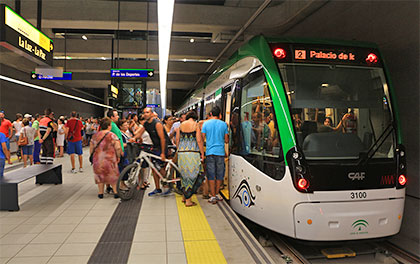 From July 30, 2014 the Malaga subway is operational providing citizens and tourists short trips around the capital. At the moment, with two constructed lines, another under construction and a final one in project the subway Malaga becomes a success thanks to the amount of available stops linking a large part of the suburban areas with some of the busiest areas of Malaga.

Relevant information about the train station in Malaga

If you are looking for the Customer Service telephone at Malaga train station, call 902 320 320. However if you need to address an issue in relation to ticket sales in internet call 902 109 420.

For more information go to the official website: http://www.renfe.com