We are experts in transfers by taxi or private minibus to Sierra Nevada, one of our most popular destinations. Your driver will meet you inside Malaga airport to take you to your hotel in Sierra Nevada; click here to start booking.

We have different models of 4 seater cars for your transfer to Sierra Nevada from Malaga airport. You can opt for an economical choice with our standard vehicles; we offer higher quality transfers with our Executive vehicles or you can travel to Sierra Nevada in a luxury high-end car.

Transfer by Minibus to Sierra Nevada

For transfers of large groups of travellers to Sierra Nevada we have three categories of vehicles: The first is the Minivan with capacity of up to 7 people, in addition to our two types of Minibuses, one for 12 passengers and another one for up to 19 people.

Near the city of Granada is located the largest and most frequented ski resort in southern Spain; at a distance of 180 kilometres from Malaga airport on the motorway A-92 and 30 or 40 kilometres from Granada city depending on where one starts the journey.

Getting to Sierra Nevada from Malaga airport

“One of the highest mountain ranges in Europe with the peaks of Mulhacen at 3,480 meters height and Veleta at 3,393 m. This popular ski resort is recognized for its great slopes and its mild climate even in winter, a natural space and tourist resort which receives every year a large number of visitors eager to practice their favourite winter sports.”

The preferred site for ski sports in Spain, where is very common to prepare trips to Sierra Nevada from anywhere in Andalucía to enjoy a great day skiing or practicing different forms of snow sports such as: Alpine skiing, cross country skiing, snowboarding, short skis called snowblades or walking through the snow in a comfortable and easy way with snowshoes, among other activities. You can also enjoy a different experience with guided tours on snowmobile. Of course for all sports there are monitors that will help and guide you if you are new to the discipline.

During the summer many are interested in this great natural area for hiking, climbing the highest peaks of the mountains, bike paths for amateurs or competitions such as the celebration of the cycling tour of Spain, walks through the different parts of the mountain ranges filled with fauna and flora.

Many people take advantage of this unique landscape in Andalusia attracted by the effect it has on their bodies practicing their sport in great heights. Not surprisingly, Sierra Nevada has a complete high performance centre to provide athletes the practice of this phenomenon. In the middle of the 90´s the resort of Sierra Nevada was one of the pioneers in opening some of their slopes during the night; it continues nowadays, linking the areas of Borreguiles and Pradollano along the slope called El Rio (the River). 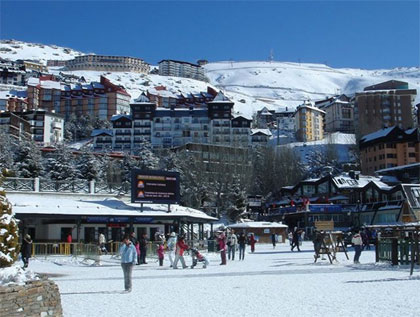 An area of ​​great beauty with its own merits. Sierra Nevada has a resort in the area of Pradollano that impresses by the contrast offered between the buildings and the majestic mountains covered in snow, always present in any direction.

The chairlift and the cable cars next to the equipment rental shops, restaurants and accommodation and the facilities in general are considered one of the best in Spain; every winter, any weekday the slopes are packed with visitors who return each year to their mandatory appointment. As we said Malagatransfer has a fleet of minibuses able to take you to Sierra Nevada.

Many people during the winter lodge in Pradollano in some of its beautiful hotels at the base of the mountain, many of these also take advantage of this site to enjoy the nightlife of Sierra Nevada; an area full of bars and cafes along with a constant presence of snow on the horizon, great nights you can hardly repeat for the rest of the year. Other tourists venture to unite snow, beach and culture, being Malaga - Granada the perfect place in Spain where you can ski, take a stroll along the beach, enjoy tapas and its culture on the same day.

If you need prices for buses or taxis to get to Sierra Nevada from Malaga or other destination, please click here. 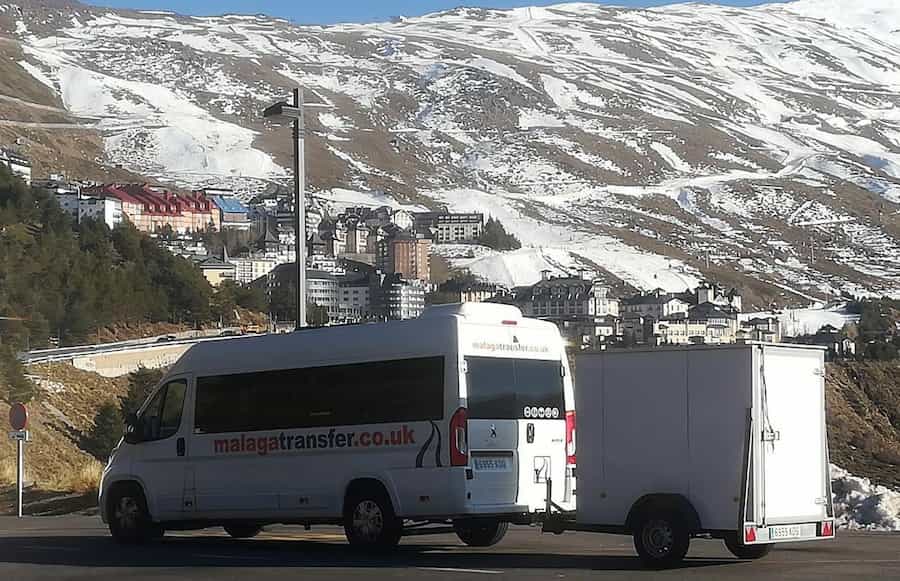