Things to do in Sierra Nevada and places to see, let’s go to Granada
×
Malaga Transfer Taxi Services Our Fleet The Airport Booking Contact Us

With the arrival of the winter many tourists in Malaga might consider visiting also Sierra Nevada; why not enjoying a few snow days in Granada?  Although it is popularly known for the ski resort, there is much more to do in Sierra Nevada. We are going to recommend places you shouldn’t miss, whether you go skiing in winter, hiking during the summer or just visiting some of the towns in the area.

Getting to know Sierra Nevada

The Sierra Nevada National Park has great ecological and cultural value. Romans, Visigoths and Muslims have passed through these mountains throughout history. Nature is the undisputed protagonist of this Natural Park; a multitude of trails lead us into the mountains and take us away from civilisation, allowing us to get to know a little more of this impressive landscape every time we go there.

Sierra Nevada was declared a National Park at the end of the 20th century for protecting its flora and fauna. A Mediterranean and high mountain with a rich biodiversity; you can visit anytime during the year, although it is famous mainly for its ski resort, its good weather and its proximity to the Costa del Sol.

If you’re reading this from Malaga, you can be in Sierra Nevada in less than a couple of hours; whether for skiing or enjoying nature if out of the snow season.

If you are planning to go skiing in Sierra Nevada, the resort usually opens by the end of November. In 2021 the opening date is Saturday 27 November, so you can already make plans to go skiing in Granada.

When to visit Sierra Nevada in Granada

When it comes to visiting Sierra Nevada, it depends on what you want to do when getting there. In general, spring is a good time to visit Sierra Nevada, both for skiing and to get to know the surroundings and enjoy the good weather.

Do you want to go skiing? Then you should know that the resort usually opens by the end of November, although its slopes are at their best between February and March, as this is when it has the greatest thickness and the longest pistes. This is also when the weather conditions are the best, but as it is high season, prices tend to be slightly more expensive. 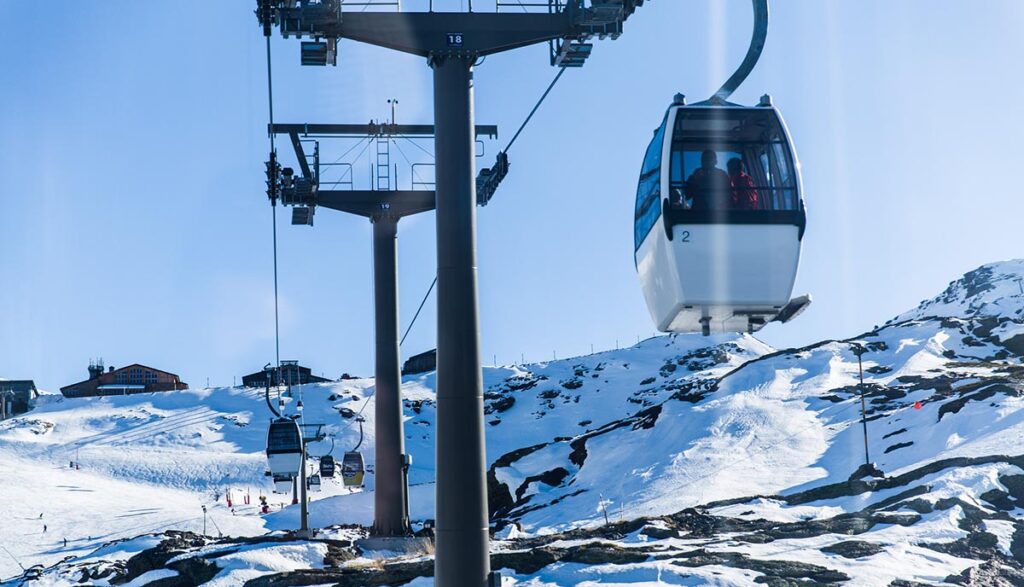 If you want to spend as little as possible, then you might want to visit the Sierra Nevada between late November and February, which is also the period when it usually snows.

How much does it cost to ski in Sierra Nevada? The price for skiing is around 45€ and it is free for children under 6 years old. For children between 6 and 16 the price is 30€ per day. These prices are approximate and vary depending on the season.

If you don’t mind skiing but want to enjoy the biodiversity of this Natural Park you can visit Sierra Nevada after the snow season. From April to June it can be a perfect time to enjoy nature in the area.

5 Things to do and places to visit

During the winter, snow-related activities take the spotlight; from ski touring and downhill sledging to dog sledding and, of course, skiing and snowboarding. The rest of the year you can enjoy fantastic hiking, trekking, paragliding and horse riding among other activities.

In the southern part of the Sierra Nevada we find La Alpujarra, a historic region of Granada whose name comes from the Arabic.  Historical records of this municipality at the foot of the sierra date back to the year 711, with the arrival of the Arabs.

Water is one of the key elements of the Alpujarra, at an altitude of 2600 metres, it is bathed by rivers, fountains and springs. It is undoubtedly a place that will not leave you indifferent and where you will find numerous monuments to visit:

There are too many interesting places to visit in the Alpujarra, so we will create an article dedicated to this location.

Whether you visit Sierra Nevada during the snow season, summer or spring, you won’t want to miss this wonderful village where the ski resort is located. Its name comes from Arabic and means monastery.

Within Monachil we find one of the most popular routes for hikers visiting Granada, the Los Cahorros route.

If you enjoy nature, you can visit Los Cahorros, a spectacular spot in the Sierra Nevada. Hiking trails for the whole family, hanging bridges and a natural environment that will leave you open-mouthed.

Los Cahorros is a gorge that has been created by the Monachil river; cutting rocks as it passes through over the centuries.

It is an ideal destination to enjoy outside the snow season and is located near Monachil, where the Sierra Nevada ski resort is situated.

Of course Sierra Nevada is popularly known for its ski resort and its slopes. The ski resort is the most southerly in Europe, hence its reputation for good weather. It is common that before the end of the season and during the spring, at the end of April, the traditional “swimming costume descent” takes place, during which you can enjoy the good weather and also have a good time.

How is Sierra Nevada different from other skiing destinations? In total there are more than 110.4 km of skiable slopes distributed over 131 runs with the highest ski slope gradient in Spain.

Numerous events take place throughout the season. From regional championships to world championships, here are some of the events taking place in 2022.

In this park you will find the Mulhacen, at 3479 metres above sea level; it is the highest on the peninsula. Among the fauna, the presence of the mountain goat stands out, as well as badgers and wild cats.

Within the park you can find different natural spaces.

There is not enough time in a holiday to walk every single trail in this park, so every time you visit there will be something new to discover. It is 35 minutes from Granada and the roads are in good condition: https://goo.gl/maps/smq9DpLxYh1RgZHy5

Hiking to the Veleta Peak

There is a bus that drops you off about 3.5 kilometres from the peak of the Veleta, which at 3,398 metres is the fourth highest peak in Spain. You will have access to breathtaking views not only of Granada, but also of Jaén, Almería, Córdoba, Málaga and even the Rock of Gibraltar if the weather is good.

Near the summit is the scientific experimentation observatory of the University of Granada and a little further down is the radio telescope and observatory of Sierra Nevada, which offers guided tours and from where you will also find impressive views.

Ascent to the summit of Mulhacén

With an altitude of 3479 metres above sea level, it is the highest peak on the peninsula and the second highest in Spain.  Its name comes from the Arab Mulay Hasán, who was the penultimate king of Granada and who is said to have been buried on this mountain.

In the past, the ascent was permitted by motorised vehicles, but nowadays it is only possible to do so on foot, by horse or by bicycle. The climb up the north face is impracticable due to the steep slope, so you will have to take the route from the south of the mountain. If you are interested in reaching the summit, the best time to do so is during the summer, as the lack of snow makes the ascent easier; although you will encounter snow along the route.

You can reach the summit on the same day from the towns of Trévelez or Capileira. There are minibus services from Capileira to the Trévelez viewpoint at 2600 metres above sea level, from where it is easy to reach the summit.

It is not recommended to climb during the winter, as weather changes can be deadly.

Transfer from Malaga to Sierra Nevada

We offer transfers from Malaga to Sierra Nevada and we can even bring your ski or mountain equipment. Do not hesitate to contact us to book your transfer to Granada.