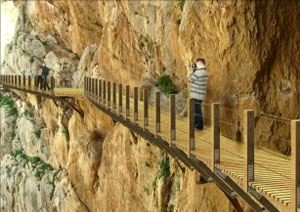 The Caminito del Rey (The Kings Walkway) is a walkway constructed in Los Gaitanes Gorge located in El Chorro, Ardales, an excellent area for all kinds of outdoor activities such as hiking, biking trips, camping, fishing, a swim in the reservoir, a boat trip, a picnic, etc.

The Caminito del Rey is famous for its vertical walls, very popular among climbing enthusiasts; a spectacular walk at 100 meters height along a spot like no other.

Since the prohibition imposed by the Government of Andalusia, due to its dangerousness Malaga Provincial Council has not relented in its efforts to rehabilitate the walkway and while awaiting a specific date, it has been known that the opening to the public is scheduled for the first quarter of 2015.

The rehabilitation of the walkway involves a change of the almost destroyed cement structure in a wooden footbridge properly anchored to the rock and together with its appropriate rail to facilitate walking and visitor safety. The project also adds a parking area in the lower part of the area.

Access has always been free, until the re-opening when the visitors will have to pay a nominal entrance fee, whose amount is not known so far.

A little bit of History

There was a time in the early twentieth century that the owner of Salto del Chorro and Salto del Gaitanejo cascades required the construction of an access so that his operators could move from one point to another, in order to transport the material more easily. Finally, after four years of construction was achieved the completion of the walkway, which began along the railroad tracks and ran along the Gaintanes Gorge with a total of 3 kilometres.

In 1921 King Alfonso XIII attended the inauguration of the Conde del Guadalhorce Reservoir and also visited the walkway which from that moment was called El Caminito del Rey (The Kings Walkway).

Why was the passage prohibited?

During the 90s, the walkway was already in a terrible state as there was virtually no stretch with railing, not to mention the large number of sections destroyed by deterioration.
This situation largely committed hikers who had the courage to cross the walkway, many attracted by its danger.

Anyway, after several accidents and two fatal accidents in 1999 and 2000, the Andalusian Government made the wise decision to prohibit the walkway imposing heavy fines on anyone who failed to comply with the restriction.

You currently have to make an appointment to visit it, but it is an activity that is totally worthwhile if you are not afraid of heights.