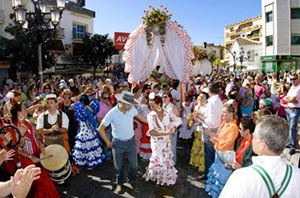 On Sunday September 21 takes place the traditional Pilgrimage of San Miguel, a pilgrimage of carts pulled by oxen and tractors to the area of pine forest of the municipality where the tour concludes. The pilgrims begin to gather at 9 am at different locations in Torremolinos and from 10 am onwards begins the pilgrimage.

Once in the pine forests, each cart has a marked area and after some rest everything is ready to enjoy the party, lunch, drink, without forgetting the celebration at 5:30 pm of a Mass in honour of St. Michael the Archangel. 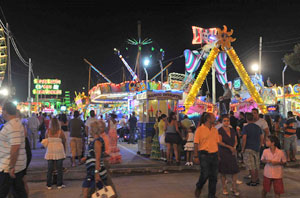 This year 2014 Torremolinos Fair will begin on Thursday, September 25 and end on Monday, 29. Both the Pilgrimage and the San Miguel fair are considered along with Easter the most important festivals of the municipality. During day the party takes place in the centre of town with performances and concerts in the most important squares and during the night continues on the fairgrounds of Torremolinos.

The fairgrounds has over 25 different booths, a large auditorium ready for performances by leading artists and an area further north consisting of 4 streets filled with market stalls, raffles and attractions. Also, anywhere you see stalls where they sell from hot dogs and hamburgers to Churros with chocolate.

Below the most significant activities: